In the 20 plus years that my family and I have been into preparing for the worst and hoping for the best, a meltdown of the US financial system is one of the items on our list that we have attempted to prepare for. We’ve heard it for years now, so much about doom and gloom for our near future that it sometimes falls on deaf ears. But as things continue to evolve around our globe it’s clearer than ever that the possibility exists that the United States really has the potential to soon become another Greece or Spain and experience the pains of serious financial stress. 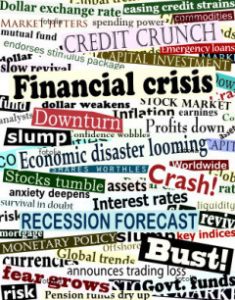 Our country has trillions of dollars in our national debt (and a growing debt ceiling – even under a republican administration no less), considering the threats of war with North Korea and / or Iran and other factors help to create a looming picture of the future – and it isn’t pretty. We’re very possibly poised for that financial disaster that has been predicted for decades on a scale that’s never been seen before in our country within most of our lifetimes.

Some experts say that gold and / or silver are the best things to put your money in if the financial world as we know it collapses. What is surprisingly enough to me is that all the companies selling gold and silver are still willing to take your US currency in exchange for their precious metals, (because they make a profit on the spread when we buy or sell). Some advice that I have gleamed over the years from various respected sources is that probably some gold and / or silver as an investment in the amount of around 10% of your savings would be OK. There are others say that only real assets will be worth anything will be things like land, food, water, weapons, ammunition, chocolate, whiskey, toilet paper and barter items. According to them tangible / consumable items will be the top priority for those who have lost all their financial investments in stocks and bonds. An investment in some of each is the smartest plan for whatever events may happen.

One thing is a constant for the majority of us here in America is that we tend to eat three meals a day so food that lasts in storage if the grocery store shelves are empty is a wise investment. Some sort of a Just In Case supply of food make sense. Whether it be a weeks supply of basics in the pantry, a year’s supply of canned goods for your family, some rice, beans, pasta, sugar, wheat and instant potatoes sealed in 5 gallon buckets, (consider this source for some of your long term storage food), or Freeze dried foods that can last up to 25 years, it would be wise to have something on hand if the meltdown happened and fresh food was hard to find.

Adding war to the mix of an already fragile economy could very likely cause the value of a dollar to fall dramatically and our record setting stock market run could be abruptly slammed into reverse. In that kind of a meltdown the ones who will survive the disaster the most comfortably will be the people who have diversified their assets in stock market investments, real estate and physical goods.

If war does reach our shores and if it’s a West Coast missile strike from North Korea, no doubt mass chaos will occur in many of the major population centers on the coast. In addition to the damage from the explosion, prevailing winds could scatter radioactive fallout across much of our nation. Any disruption to our banking and federal credit systems will affect many people. Particularly those in the cities that have come to rely on government programs for their income and support. As soon as that support is delayed or is gone, anger, confusion and anarchy will begin. Access to food and other supplies, internet, cell phones and ways of gathering information will be limited at best non-existent at the worst.

If we experience an EMP attack from a foreign enemy or Solar Flare event similar to the Carrington Event that effects most or all of the Continental US electrical grid, all bets are off. In a case of an EMP we will be living like people did back in the early 1800’s before electricity was common. Survival will be hard for anyone not prepared, educated and skilled in basic survival skills. Intentional and intelligent preparations made now for the worst case scenario is the best way to ensure you and your family’s survival.

One way to prepare for the commonality of most disasters is to study the old ways of doing things. Use the time you have now to learn new skills and practice those skills. Knowledge is truly power and if studied and practiced it cannot be destroyed, lost or stolen from you like physical items can be.

Keeping a basic survival kit that includes some cash, radio, batteries, flashlight, medical supplies and of course food supplies and water to last at least for two weeks is a place to start a preparedness plan.

Some important financial records that you’ll need are items such as social security cards, birth certificates, insurance policies, wills, marriage licenses, records of property deeds or house payments, insurance policies, sources of income and tax statements. These should be stored in a portable fire proof safe at the very least so if you need to leave in a hurry, all the important paperwork is in one place. Then, if disaster strikes, you’ll have the necessary documentation to begin a new life. You may even want to include photos of your family, house hold furniture and possessions as proof should there be a loss due to a disaster and insurance is available to help you recover.

Many “Experts” have for years been predicting a stock market crash in the near future. One fool proof way to protect yourself from complete financial ruin is always have a cash emergency fund readily available and well secured. A mixture of small denominations, $1, $5, $10 and $20 is better that a stack of $100 dollar bills because change may not be readily available. If the power is down for whatever reason, banks and ATM’s won’t be available and cash is almost always accepted.

If you have investments in the stock market, whether it be in stocks, bonds or a 401K or IRA, work with a trusted financial advisor to set up a diversified portfolio that will minimize the damage if it does happen. (I strongly recommend you check out Dave Ramsey’s website for his endorsed local providers located in most cities. They have been vetted as honest, knowledgeable and conservative investment teachers). As much as you might want to sell everything after a crash, it’s probably the worst thing to do. Even after the crash on October 30, 2017, although it took a number of years, the market eventually recovered and value was restored. If you had gotten out then and stayed out, you would have missed the gains that eventually returned.

The market is resilient and it will likely return to a point in time that’s better than what it would be at the beginning of the crash. Don’t succumb to pressure – from yourself or others to sell everything at ridiculously low rates. Be patient and you’re likely to get at least some of your investments back to a reasonable price.

Being in the middle of a disaster is stressful and can cause you to make wrong decisions in the heat of the moment. Take the time before a possible disaster to stop, think, plan and finally react.

Remember that you can’t control if or when a financial disaster might strike our country or the entire world, but you can put some basic steps in place and make plans to minimize the damage to your family. If you have prepared for the worst you have much better odds of coming out safe. Additionally it should also be said it’s not a bad idea to get right with your maker. Praying for strength, guidance and wisdom while things are good or bad is a powerful asset to have on your side.