It seems like every day we are warned about another eminent threat to our way of life here in America. The news media broadcasts are filled with doom and gloom about war, financial collapse, protests, riots, natural disasters and such. But one thing not being discussed very much in the main stream news outlets is the increase in global health and disease threats and the outbreaks that have occurred in 2017. Many of these diseases were thought to have been cured and eliminated from the United States general populations for years and in some cases decades. 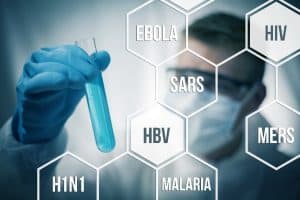 Influenza / Flu infections are predicted to be particularly bad in 2018. Reportedly the flu virus nasal inoculations have not worked as well as the flu vaccine injections did in past years.

The AIDS epidemic while it isn’t in the news these days very much, it is still infecting people around the world every day. Fortunately we now have drugs and treatments that allow many people to survive after being infected with the disease. But there are still people being infected from different sources worldwide that are may not have money or access to treatment and will most likely suffer and die from this disease.

Recently in the news are reports of Tuberculosis infections being diagnosed in our Southwestern states. Those cases that can be traced to origin and verified indicate the disease is coming in from points across our Southern border. Unfortunately large numbers of poorer people in the South American populations do not have access to the preventive vaccines for diseases that are commonly given in North America. A unknown number of the people from Mexico, Guatemala, Nicaragua and Columbia that have migrated here illegally to escape their countries poverty are bringing in disease that they are most likely unaware of.

Could the Black Plague be coming to our country? The plague was diagnosed in three people in New Mexico this year. More recently a serious outbreak has occurred in Madagascar and there are concerns whether or not local officials and physicians will be able to treat and contain the spread of the disease. While the outbreak in New Mexico was successfully contained, it brings up concerns and worries that something so devastating could still be a possibility of re-occurring somewhere within our borders.

Another worst case possibility for a pandemic would be a disease like the Influenza virus that mutates into a deadly strain. With the ability of humans to travel and connect with each other in a matter of hours through air travel, such a disease could spread across borders and countries like wild fire. A more  virulent disease resistant to available treatments could spread so rapidly that we don’t have the means to treat it effectively. Although the United States is a leader in global health and disease prevention, its abilities to predict, react and produce effective vaccines for the masses are not with out limits.

Even with the increase of people raising a few backyard chickens for fresh eggs would you believe that the CDC is now warning people about it. They advise that owners should use caution when getting too close to their feathered pets like chickens, ducks and geese. Their fears are based on the possibility that a new bird flu strain could evolve from the close contact with humans and then spread and infect the human population.

Don’t discount the possibility that our terrorist enemies might be bio-engineering a disease strain to introduce across the world and kill there enemies, like us. With the increase in new global terrorists cells and threats, the possibility of a man made nasty disease is more likely than in the past. For example, scientists discovered that if you introduce an extra “mousepox” gene in a mouse, it’s much more likely to be lethal. Mousepox is a version of the human disease of smallpox, so you can imagine how smallpox could affect us since small pox immunizations were no longer commonly available to citizens in the US since around 1971.

Diseases we’ve seen before have come from contaminated food or water that have wreaked havoc on portions of the population. Remember reported cases of E. coli, Salmonella and Staphylococcus infections that were determined to be caused by improperly handled food products. How about the Zika virus infections in Florida? Don’t forget Ebola and the flu that could all experience an increase in incidents if new strains develop resistance to current drugs and treatments.

Also, don’t discount weather events that contribute to additional illness and deaths because of malnutrition, stress and malaria – especially in those global regions with poor health infrastructure. The recent hurricanes this year still have many people in the Caribbean islands like Puerto Rico dealing with contaminated water, enduring extreme heat and other stressful conditions that will have a negative impact their health.

First, if you have not already done so, is to acquire knowledge. Learn all you can about basic first aid, the means of prevention of common diseases, their treatment and early detection. It’s also not a bad idea to be aware of what’s happening in the rest of the world by monitoring websites and news outlets you have come to trust.

Consider that there will be two likely scenario’s for a rapidly spreading disease like a pandemic. You will need to consider that this will be a decision making process you need to prepare for now. Either notification is received with enough time that you can gather some things and bug out to a safer location – or – more likely, you must shelter in place until the threat has passed.

If there is advanced warning and you have a planned place to go that is safer, (are you sure?) and (can you get there safely?), and your bug out gear and vehicle are ready, then it might just be time to run away.

But what if there is not an early warning and your neighborhood or town is placed under a mandatory quarantine. How much food and water do have stored that you can get to without leaving your home, (off site supply cashes are not accessible)? What are your preparations for sanitation needs? Do you have the equipment, supplies and the training to defend your family and property if the need arises?

The basic human needs for survival and to have relative comfort are:

If you have not already done so, now is the time to make a plan that addresses these common preparations virtually every disaster type event would call for.

If you would like to increase your knowledge of first aid, disease prevention and surviving disease outbreaks please use our link to books to find the newest titles for your reference and to learn different ways to deal with disasters of all types. Type in Survival Medicine in the search box at the top of page to find a large selection by different titles and authors.