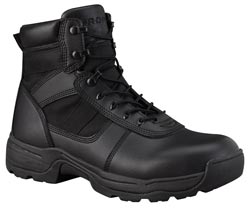 Good quality boots are the first line of defense to what mother nature has in store to throw at you and they need to stand up and take a beating when called upon to do so. Through slop, mud, rain, puddles, you name it, if your feet are wet, your uncomfortable and it is one more thing to interfere with your concentration when you need it most. Whether you’re in the woods during hunting season, on a hiking trip, or you’ve been called out to help rescue someone lost in the woods, you need boots that will keep your feet dry yet also let sweat from a hard day’s work evaporate and not bog down your socks.

In the old days, waterproofing boots was an inexact science. Everybody and their brother had “the trick” to keeping water out and socks dry. From tree sap smeared over the seams and laces to all sorts of natural concoctions (and a few toxic synthetic ones), everyone said their special formula was the best. Truth was, however, that while there were some good ideas, at least in theory, none of them performed as advertised all the time, mostly because while they might repel water for a short time – maybe – none of the brushed on or dipped remedies fit the second criteria: breathability. In fact, adding old style water sealant made it worse. Water couldn’t get in, which was good, but neither could sweat get out. So socks got soggy and cold, feet developed blisters, and boot wearers suffered in the wilderness.

So much for homegrown remedies.

Today, boot manufacturers have uncovered the mystery of how to keep water out while keeping feet dry and comfortable, and it didn’t come from a tree or a cabin in the woods. It came from a much more technologically savvy source: the outdoor clothing industry. Who better to teach waterproofing than folks who spend days at a time out in the rain on purpose?

The outdoors industry had learned long ago through their own similar struggles the best way to manage the balance between keeping water out and letting sweat out at the same time. All the footwear industry had to do was figure out how to apply the same technology to shoes and boots. 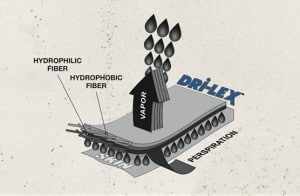 One thing outdoor clothing and footwear have in common is seams. Materials are stitched together at overlapping points, which poses a problem: How do you ensure no water seeps into between the cracks? Seams generally run in straight lines or predictable patterns, so it’s simple to apply a waterproof sealant that could harden to an invisible, thin, rubbery texture to close even the smallest gap. What isn’t so easy is the fabric.

That’s where breathable fibers come in. Following Gore-Tex®’s lead in the 1970’s, fabric manufacturers began experimenting with one-way water-permeable materials that repelled rain but allowed sweat to come out to the surface for evaporation. Combined with moisture-wicking polyester-based layers, this new fiber structure finally solved the decades-old problem of how to make waterproof boots breath, at least for the fabric parts. One popular such fiber is Dri-Lex®, which is engineered specifically for footwear.

But what about the leather?

Leather on its own is very susceptible to water damage. While that might not make any sense at first – don’t cows stand out in the rain and not shrink? – because it is a natural fiber it is much more prone to drying and cracking. To prevent that, the leather is first treated for general boot construction and then a waterproof layer is applied to the outside, much the way Teflon works with cookware and tactical pants. This non-stick surface allows the rain to bead up and run off the boot rather than penetrating or being absorbed by the leather. The added benefit is that it’s harder to stain the boots, so they look better longer.

How do you tell which boots are waterproof?

Many boots come in waterproof and non-waterproof versions that look alike on the outside. To figure out which is which, check the lining. Waterproof boots will not only have an extra layer in the inside – often in a contrasting color, but not always – they will typically have a gusseted tongue, meaning the tongue is attached not just on the bottom but also up the sides to help keep water from splashing inside.

Waterproof boots aren’t entirely guaranteed to keep every drop of water outside, but there are certain purposeful elements designed into the boot to minimize the chance your feet will get wet. So whether you’re out on the range plinking steel after a hard rain or need a great duty boot such as our Series 100 waterproof that will stand up to harsh conditions, waterproof boots give you a protective option that looks good.

Fact of life: feet stink. Which is why boot makers have begun adding anti-stink liners to certain models of hiking, tactical, and even snow boots. Much like apparel tech, boot odor-removing liners can either mask the smell or kill the bacteria that causes it. The same pluses and minuses apply to each. One covers, one removes.

Propper boots are lined with anti-microbial material that prevents odor-causing microorganisms from growing and therefore creating stench. By breaking down the microorganisms, the boot liner not only prevents foul odor, it can also make the liner last longer because the same tiny organisms that cause stink can also break down the fabric inside a boot. So this lining serves two useful purposes: anti-stink and increased material longevity.

Anti-odor tech has come a long way, and while it doesn’t promise you’ll come out smelling like a rose, at least you won’t stink like a walking locker room.