What to do during a terrorist attack

Are you and your family prepared for the possibility of a threat of terrorist attack in the coming year? According to government officials, regardless of whether it’s for religious or political reasons, the threat is real and preparing for an attack should be on your list of top priorities. With the recent discussions of the United States recognizing Jerusalem as the capitol of Israel, terrorists groups like Hamas are calling on their followers to wreak havoc on America and the world. Worldwide the potential for tensions will only increase over the foreseeable future. 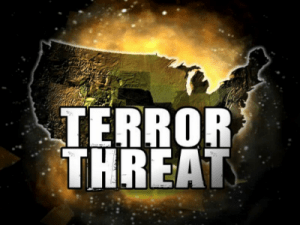 Terrorists have managed to bring death and destruction to places all over the world including the US. It’s not just the possibility of bombings but now they have started using vehicles to run over people in crowds, poisoning food and water supplies and its been reported they’re even working on drones that can carry a dirty bomb to a populated area. While 2017 hasn’t seen the same incidents on our soil as we did in 2015 and 2016 in San Bernadino, CA. and Orlando, FL. it doesn’t mean an attack like that is off the table. It might mean they could be planning something that has not been tried before, a new type of attack.

While it seems attacks are usually random with little or no warnings, you and your family members should try to be aware of your surroundings at all times. Situational awareness could be the one factor that saves your life. If you are not military, LEO or First Responder trained you may not be aware of the “Normalcy Bias” thought process. It is the tendency for people to not believe in the possibility that they might be involved or affected by a disaster. Primarily because people have a bias to believe that things will always be normal in their surroundings because they have been so in the past.

Times have changed and we have to take into consideration that there is truly evil that exists in our world today.

Terrorists look for vulnerable targets and ones that will result in the highest number of casualties, so large gatherings in restricted areas are prime targets. Fortunately law enforcement agencies are aware of the thought processes of these evil groups. Law enforcement personnel are better trained, prepared and visible at large gatherings and celebrations here in the US more so than in past years.

If you find yourself in one of these gatherings and the unthinkable should happen you should know some steps to take to improve your chances of survival.

Experts advise that there isn’t one defining answer for surviving a terrorist attack, because of the variations of each situation. An attack involving an active shooter, a bombing attack, a vehicle attack or chemical attack require some different first responses. But your state of mind can help increase your chances of survival during an attack. Your adrenaline will be pumping and your mind will be searching for a way out of the threats of gunshots or explosions. Any self-defense training you have taken will be an asset in a stressful situation like an attack.

The recent the public safety campaign which encourages potential victims to “Run, Hide, Fight” was step in the right direction as far a general awareness program. This strategy is first, evacuate the area to escape the threat. If all escape routes are blocked then attempt to hide in a secure location until threat is over. Last option is if you are not able to hide, then plan to fight. Fight with any and everything at hand. Be advised, there is no middle ground when someone is trying to kill you. You must fight back with the intention to stop the threat by any means possible. That means kill them before they kill you.

Other public response instruction has been produced with slightly different approach and strategies to survive violence such as an active shooter. “Move, Escape or Attack” is said to be a more realistic plan for the general public.

As a rule doing exactly what you’re told by authorities during an attack is a sound plan. We expect them to have accurate communications as events develop and they have practiced ways to handle emergency response to events. If you hear on the news or social media that an attack has happened, pay close attention to directions and follow any orders that come from reliable sources.

General preparedness in every way possible should now be a mandatory part of your life if you hope to cope and survive. Terrorism has come to our shores before and likely will again. Now is the time to get prepared, physically, emotionally and spiritually. With the clear and present danger from a terrorist attack being foremost in our minds today, awareness and preparedness are the keys to surviving whatever comes in 2018.

Here are some web links and book recommendations for more information.

The Terrorism Survival Guide: 201 Travel Tips on How Not to Become a Victim

The Citizen’s Survival Guide: Terrorism; How to Survive an Attack

Prepare for Anything: Survival Manual

How Not to Be a Victim and Survive A Terrorist Attack

Left of Bang: How the Marine Corps’ Combat Hunter Program Can Save Your Life

How to Develop the Situational Awareness of Jason Bourne