My first interest and involvement in amateur radio was back in the late 1960’s when I was in the Boy Scouts. One of our scoutmasters was a HAM radio operator and would invite us to tour his “Shack” as he called it and see how he was able to talk to people all over the world from his desk. He did not just talk to people, he also sent messages using Morris Code which at the time seemed like secret messages and the stuff spy’s would use. Although I was impressed and interested, the money for a radio was not in the cards, I was saving up for a motorcycle after all. 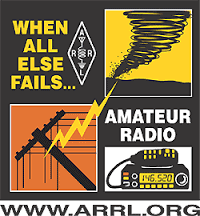 Fast forward to sometime during 1999, everyone’s talking about Y2K and how all the computers are going to crash. The trucking company I’m working for has us coordinating with computer programmers to fix the bugs within our network. We have weekly strategy meetings to try and cover all the weak points in our system should the worst happen. Since we are running trucks from coast to coast and have over 100 freight terminals, alternate communications is an important part of the planning. Enter the HAM radio operators. It’s decided that we will try and locate at least one licensed HAM in every city we have a office and try to establish a means of communications should the systems come crashing down because of the Y2K bug. Since the system did not crash as was being predicted, we never needed the help of the operators we contacted, but it was enlightening to know there was a means of communicating in a worse case scenario.

Next up is August 28, 2005. We are evacuating our home in Covington Louisiana, which is about 30 miles North of New Orleans, because Katrina is heading our way. We “bugged out” to Dallas Texas for a couple of days and only one day after the storm hit the area, both mine and my wife’s cell phone were useless. For whatever reasons, the 504 area code for the region quit working. We could not call out or receive any calls inside that area code, even using landline phones so we were out of touch with friends and family we left behind.
It was during this time I began to wish I’d gotten around to getting my HAM license.

Finally in April of 2011 some friends told me about a basic HAM class being taught by a local group and I signed up.
I’m sure that people get involved in amateur radio for all kinds of reasons. Many of the experienced HAMs in our local clubs are experimenters and enjoy building their own rigs and repairing electronics. We have others that are interested in public service and serve as local storm spotters when the weather is bad. Others like myself see amateur radio as a major part of their preparation for an emergency situations like tornado’s, hurricanes or floods.

Below are some links for you to explore:
· ARRL is the National Association for Amateur Radio and is one of the best places to find information for both beginners and experts alike. www.arrl.org
· www.QRZ.com is a really good site for information and after you register they have free online tests to prepare you for your Technician, General, and Extra licenses.
· The American Radio Preparedness Net (TAPRN). These folks are the co-creators of the Standardized Amateur Radio Emergency Communication Plan.
· “The Skinny on Ham Radio” is an article on The Survival Mom’s Blog site.
· Radio Survivalist. This site contains links to many different online amateur radio resources for preppers, including information about rigs and antennas.
· Our Communications offerings Links to radio and antenna products that we offer on our site that are Proudly Made In America by Americans.
Remember, Goggle is your friend, try searching for local Amateur Radio clubs in your area to learn where local classes and gatherings are as well as more information from amateur radio websites.