It’s starting to look like the chance of war is becoming more and more likely now – and if the new trade sanctions don’t work, that could be what we’re facing in 2018. The dictator in North Korea is threatening nuclear destruction and add to the mix tensions with Russia are shaky. Let’s not forget that Iran was given billions of dollars and they’re putting it toward their own war waging supplies and nuclear capabilities. They have a long time deep hatred for our country and our freedoms. 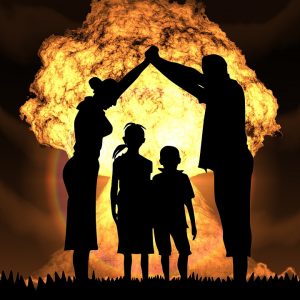 So how would a war look like with today’s technology? A war today would eclipse most of the other wars we’ve been involved in by a factor of tenfold. With the cross section of the countries involved, the stakes that are being fought over and worse case that it could likely include nuclear weapons, the possibilities are grim. Considering the possible scale of the loss of lives, destruction of property, interruptions of communications and everything we take for granted could be impacted in the blink of an eye.

If war comes to our shores, our lives as we know it now could be changed forever and the simple things like clean water, food and electricity might disappear, maybe for decades. If you’re one of the lucky ones who survive, you need to be self-sufficient by preparing for the worst. Even if we are able to fight the war “Over There” and not see combat on our continent, there will still be serious impacts to our way of life. Family members will be lost in the battles and the Military Industrial Complex will go into high production mode. Gasoline and fuel prices will go up as will the cost of food. Who knows what the effect on the US stock market and economies worldwide will be.

Countries such as Israel know about terrorist attacks and bombings and they have prepared by erecting and supplying bomb shelters near schools, governments and businesses in their nation. The United States hasn’t had to deal with the concerns of bombings across the nation since the Cuban Missile Crisis in 1962, so we have no access whatsoever to a nationwide shelter network. The attack on 911 showed us that we are vulnerable to foreign invaders but it did not fundamentally change our way of preparedness as a nation.

If a nuclear strike happens on United States soil it is up to you and me to prepare for the worst. Having supplies such as chemical protective masks that are rated for chemical and nuclear emergencies will increase your chances of survival. We should also have on hand a supply of potassium iodide pills which reduce the chances of developing thyroid cancer in case of airborne radiation exposure.

A supply of food for your family that does not require refrigeration and access to clean water is also mandatory. The Emergency Broadcast System is designed to notify the public of impending emergencies so heed warnings from the government carefully. If you get the message that the missiles are coming, evacuation if you are in a major metropolitan city is probably not going to be an option. If you’re lucky enough to have a bomb-proof shelter nearby, head to that.

If the electrical grid goes down for any amount of time in your area it will be necessary that you have a reliable portable power source on hand. Small gasoline or propane powered generators are commonly available that can maintain some of your household basic appliances. Consider if you go this route, you will also need to store a supply of fuel since there may not be more available for some time. You will want to be able at least to keep a small AM radio, flashlights and your cell phones charged up. Small compact portable solar panels can be a good choice for that.

Other critical emergency supplies would include reference books for foraging for food in your local area, maybe some fishing and trapping supplies and weapons for hunting. Training in the safe use of firearms is important and should be considered with the possibility of protection for your family and self-defense in mind, especially if help is not immediately available.

If you decide to bug out ahead of the crowds you’ll want to have a supply of detailed road maps for your area (search for Delorme maps here). GPS may not be available, your cell phone may not work either.  You want to know the least used roads that will get you out of the city, so detailed maps are important. Another option is to use Google Maps to plan routes to you place of shelter. You may not be able to get anywhere by car and have to travel by foot. In that case local topographic maps can help to lead you around lakes and mountains to safer areas where survival is possible. There are options on Google Maps for routes based on fastest way by car, as well as by bicycle and walking. Plan on multiple routes to avoid traffic, bridges that may be damaged and to avoid areas of questionable populations. Local trail maps that are available online or at many of the outdoor stores are also a good option to consider.

Something else to consider and prepare for is the possibility of Martial law. Depending on areas affected it will likely be announced and will involve government rationing of food, supplies and long lines to get it. The loss of the power grid will cause disruption to trucking companies and transportation systems due to lack of fuel that we rely on for food and essential supplies to area stores.

As difficult as it may be you’ll want to sit down with your family and figure out a good plan for meeting up somewhere if an attack happens when you’re all separated. With many adults working outside the home, kids in schools and family members scattered around town you should have a couple of plans ready because one central meeting place may not be available. Consider a friend’s or close by relatives place could be where some should try and get to in an emergency until you can all get back together.

If we are about to face it, the next war promises to be one of biblical proportions. If you have not prepared your family for survival chances are not good if you are only planning to rely on the government. Take the time now to learn all you can now about survival skills and techniques. Talk to your family and trusted friends as well as relatives about which supplies to have on hand and other critical data that will increase your chances of survival. Encourage them to think and plan on what they should do while there is still time.